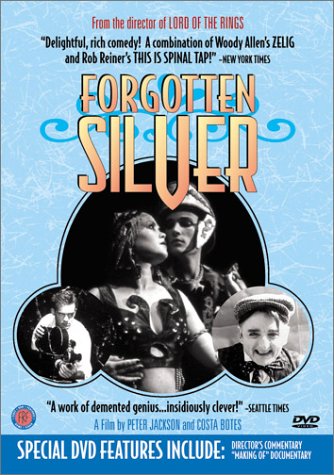 Peter Jackson knows how to create a spectacle.

Whether its 300,000 orc-slime laying siege to the city of Gondor or a lawnmower-wielding Norman Bates-style character destroying his zombie mother in a 100 gallon bloodbath finale or the sweetness of two teenage lesbian killers.

In my opinion, however, Forgotten Silver is his most spectacular film ever.

Half mockumentary, half showcase of Mr. Jackson’s obscene knowledge of film history, film technique and guerrilla film making, Forgotten Silver shows why a relatively unknown director in 1997 was given the reigns of a $300 million, three part film know as the Lord of the Rings.

Chronicling the life of “lost” filmmaker Colin McKenzie and his many achievements; from making the first color film, syncing audio to film for the first time ever, to actually filming his own death. This film demands a revival and for every student and lover a film, as cliche as it sounds, this is an absolute Must See.